No one remembers why exactly the cowgirl on Nudie Cohn’s label became modest, only that she suddenly appeared with a fringed bolero in the year 1963. Because the label’s unclothed heroine was the perfect embodiment of the Hollywood tailor’s sobriquet—an Americanization of his birth name, Nuta Kotlyarenko—it seemed like a strange and unnecessary adjustment. Some claimed it was at the behest of Dale Evans, a longtime customer then working with the Christian Ministries. A Ukraine-born Jew, Nudie had only recently decided to convert to Christianity himself, perhaps out of deference for his customer base, which was composed mainly of country singers and movie cowboys. His granddaughter, Jamie Lee, offered a simpler explanation: “Actually I think my grandmother said, ‘It’s about time we put some clothes on this cowgirl and make her up right.’” Whatever caused the change Nudie probably assumed it would be good for business. Time, of course, has proved him wrong. Collectors now pay twice as much for Nudie garments that carry “the naked cowgirl.” 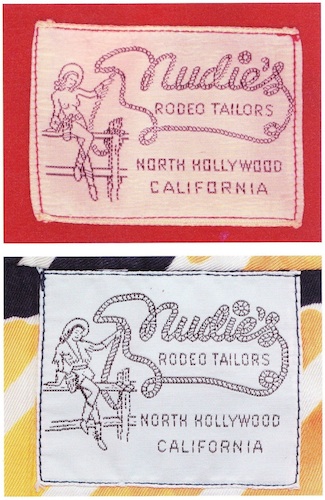