Not even Hank Williams Jr. himself knows the origins of the name Bocephus. Everyone seems to agree that it’s what his father used to call him. But where did Hank Sr. get it? There was a comedian on the Grand Ole Opry named Rod Brasfield, who used a ventriloquist dummy he called “Bocephus.” But where did Brasfield get the name? Some assumed it to be a mispronunciation of the name given to Alexander the Great’s horse, Bucephalus, meaning “ox-headed.” Others think it came from combining Bohunkus and Jocephus, the two names from the comical song “Bohunkus.” A few even hypothesized that it was derived from “vociferous,” the scientific name for a whippoorwill. I like to think it came from “bocephas,” old Cajun slang for “my little pal.” 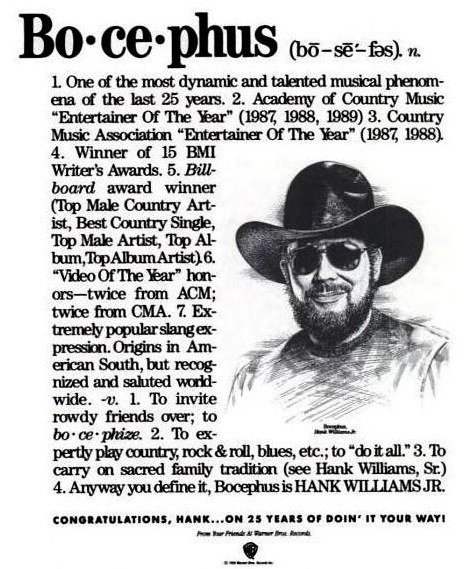