The crowd at Saturday night’s WBC heavyweight championship fight at the Staples Center was more diverse than when I was last there, for Mosley-Margarito. That January it was a mostly Mexican crowd. The matchup between Vitali “Dr. Iron Fist” Klitschko and challenger Chris “Nightmare” Arreola, on the other hand, attracted a peculiar blend of Mexicans, Germans, and Russians. (Ringside was mixed as well: Mickey Rourke, Pete Rose, Mike Tyson.) I love Klitschko but not his fans. Sitting on the other side of my pugilistic partner Peter Ellew was a heavily painted young Russian woman who refused to stop screaming Klitschko’s name in a voice that could break glass. When a Eurotrash guy in white pants and spiked hair started dancing and flipping off the Arreola fans in our section the appropriate response was to pelt him with as many plastic cups of Tecate as possible, and thankfully, that is precisely what transpired.

It was hard to pick sides in Saturday’s title matchup. The Ukrainian is a philanthropist and avid chess player, and he takes seriously the sport of boxing. Arreola grew up in the Inland Empire, fights like a battle tank, and trains by eating burritos with extra Tapatio. They both live in Southern California, and I’d be honored to treat either one of them to tacos.

When it came to skills, however, Arreola was the obvious underdog, and not just because of his flabby physique. Anyone who fights the chiseled 6’8” Klitschko appears hopelessly inferior by comparison. His punches came down on Arreola from above, and the shorter fighter’s attempts to get past Klitschko’s enormous left arm resembled a toddler trying to walk through a telephone pole. Arreola’s only hope was to absorb Klitschko’s punches while moving in and swinging wildly. By the end of the 10th round, Arreola had landed just 86 punches of 331 thrown. Meanwhile he took 301 hits from Klitschko, who threw a staggering total of 802 punches. Arreola’s friend and trainer Henry Ramirez refused to let his fighter out for the 11th.

In the post-fight interview Klitschko was gracious and well spoken, as always, but Arreola’s speech was more memorable. When Larry Merchant asked him why he fell short, the tattooed Chicano started crying and apologized to his fans. “I wanted to be the heavyweight champion and I worked my ass off,” he said, his sobs echoing around the arena. “Fuck! Vitali’s a strong motherfucker. He hits hard.” Arreola then said he never wanted to quit. His face was bloated and his body blood-spattered but it was obvious that for him the most painful part of the fight was not being allowed to go the full distance.

As an addendum, it must be mentioned that while Arreola made Jay-Z’s irritating “Run This Town” feel like a credible fight song, Klitschko’s entrance was 100% bad ass: a slow walk to the ring, hood down, to the tune of “Hell’s Bells” by AC/DC. Executioner style. 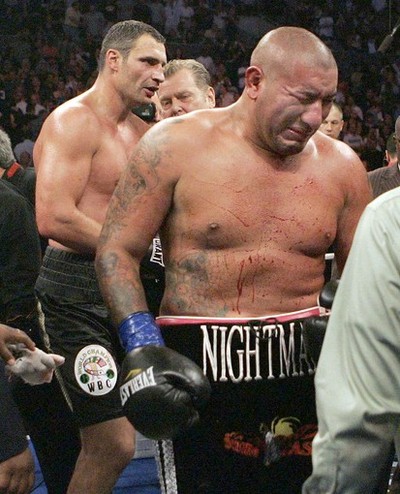