Over time Gene Vincent’s wildman persona softened. By 1970, he had gained weight and he walked with a limp caused by injuries sustained in the crash that killed Eddie Cochran. This didn’t make him less of a hero to the legions of twentysomethings who still associated Vincent’s name with their first taste of hot rock rebellion. Among those fans were the boys in the San Antonio-based Sir Douglas Quintet, who were called in to back Vincent on what would become his second-to-last LP.

The sessions commenced in March of 1970 at Sound Factory on Selma and Cosmo, in Los Angeles, just a few blocks from the Capitol Records building. Presiding over the sessions was Tom Ayres, a Shreveport native who had become a mover and shaker in the L.A. scene. He was managing the Sir Douglas Quintet at the time, and he invited most of the band to the Vincent sessions: Atwood Allen, Harvey Kagan, Johnny Perez, and Augie Meyers. Rounding out the group was a pair of session guitarists (Skip Maxfeldt and Bob Rafkin) and Quintet chum Chris Darrow on fiddle. Jackie Frisco, Gene’s old lady, chimed in on backing vocals.

The result is a Sir Douglas Quintet album in everything but name. Which isn’t to take anything away from Vincent. He was only a year from death (due to an ulcer, again related to the 1960 car crash), but was still as freaky and coltish a frontman as Doug Sahm. He doesn’t have Doug’s voice, but apes his singing style—high flattery to Doug from a high priest of rock. Like Sahm, Vincent was a country boy who earned his stripes playing sharp-cut rock’n’roll to teenagers, and by 1970 he just wanted to loosen his belt and live on as a soulful bumpkin. I suppose that’s what makes Gene Vincent a natural limb on the Quintet family tree.  That and Augie’s organ. 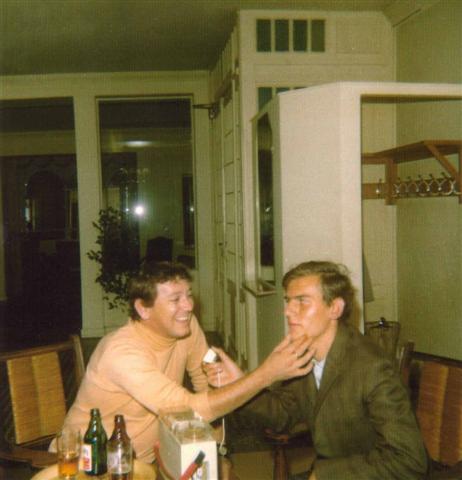