Guitarist Fernando Rivera, a/k/a King Nando, led a popular band on the Latin club circuit in New York city in the 1960s. Nando’s Orquesta comprised teenage musicians from the five boroughs, and they challenged the supremacy of older, more established acts at Bronx nightspots like The Tropicoro (on Longwood Avenue) and Hunts Point Palace (on Southern Boulevard). Whereas most salsa bands were centered on the interplay between piano and percussion, Nando’s went pianoless and was instead fueled by its leader’s rhythmic strumming. Nando called his rock-oriented interpretation of salsa “Shing-A-Ling,” and his debut LP was titled Shing-A-Ling With King Nando. If you were listening to WEVD in New York in the summer of 1967, you might have heard “Fortuna,” a sweltering, slow love song that was Nando’s biggest hit. But even better was the title track from 1968’s El Solitario (The Loner). It moves with the same mournful elegance as “Fortuna” but pursues an opposing sentiment, closing with Nando singing in trancelike incantation: “Soy un solitario, soy un solitario…” 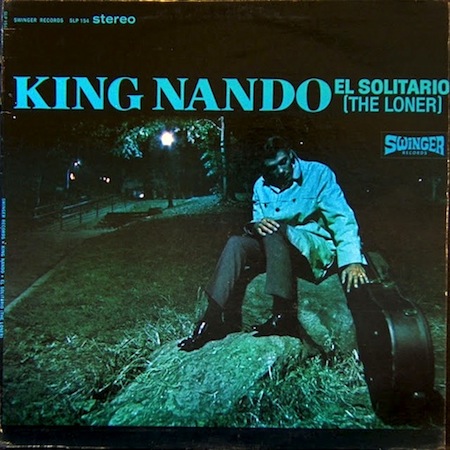